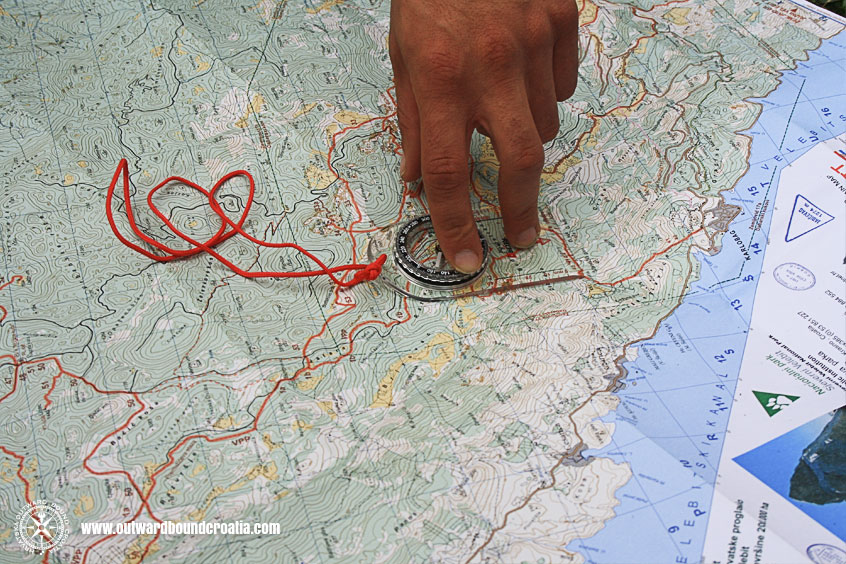 Everyone one of us have once find her/himself in a new town or in a unknown part of the known city. Asking for direction, of course, is always an option. But if you are a bit shy and your cell phone battery is on the low end or maybe there isn’t anyone to ask in the vicinity, finding your way by a map and with compass or just using cardinal directions might come in handy.

While city orientation is helped by unique spatial characteristics (statues, parks, unique buildings) or streets names, natural navigation is something quite different.

Imagine dense forest in the mountainous area. You are surrounded by nothing but trees. Although each of them made be unique, they are hardly what we can call “unique spatial characteristics” to us. Other orientation skills need to be applied in these circumstances.

Orientation in nature can be done with a compass and navigation using map, or by other natural features showing us cardinal directions (most often the north). 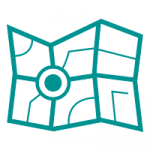 Science of maps (and study of Earth surface shape and features) is called topography. Also, there are different kinds of maps. The most often used and encountered is the topographic map. Each map should have a scale and the north direction marking, with some of them having description table of additional symbols and markings put on them. In case there is no north direction marking, it is a custom for the north to be on the upper side of the map (position the map according to written text on it).

Determination of the north 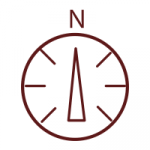 For the map to be useful, we must align it with the cardinal directions. North is most easily found with a compass. Being without a compass, one of the most accurate natural features showing north is the North star or Polaris. It can easily be found using the Big Dipper constellation

Drawing a line through “the last two” or “lower two” stars of the Big Dipper and adding five distances between those two stars will lead us to the North star. 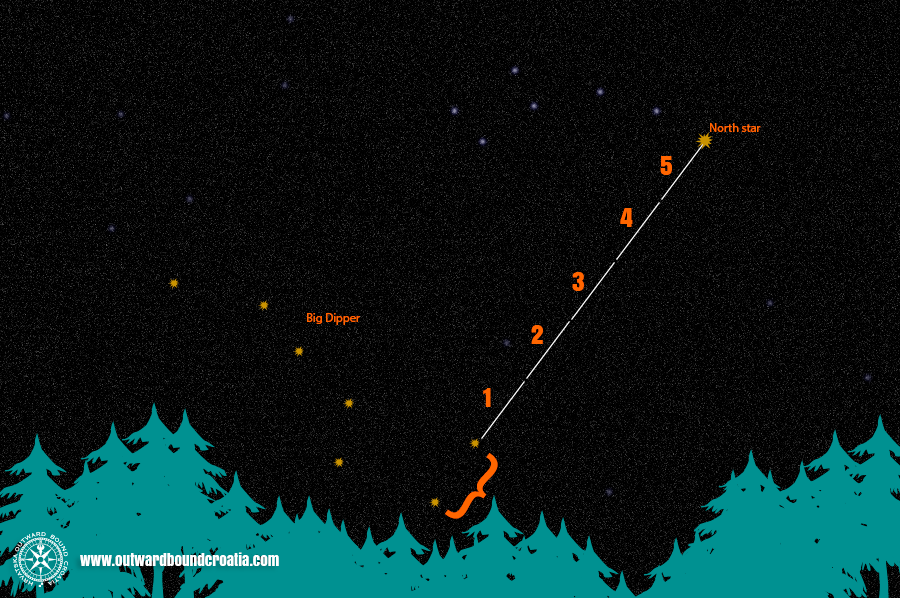 There are other methods applicable to find the north, both in the day and during the night – the watch method, alternate shadow method, using the Sun or the Moon and other natural features, such as using tree rings, tree bark or tree crown, snow or moss. It should be emphasized that the most famous method, the one using the moss, is very often highly unreliable and it is better to try using some other method first.

Determining the north using alternate shadow method is pretty accurate technique, but it takes most time. What you need is a rope and three sticks – one straight and long, and two shorter ones. Closer to the noon you are, the quicker the determination will be. Put the long stick vertically in a flat ground and the shorter one where its shadow ends. Now tie a rope to the long stick and draw a circle with the radius of its shadow. Wait until the shadow falls again on the drawn circle. There is where you put the second short stick. Now line connecting the shorter sticks is the E-W line, and the vertical on it is the N-S line. 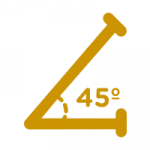 When the north is known, the second most important term in topography and navigation using map is the azimuth. Azimuth is the angle between the north and the direction you want to go. Taken that we are aware of our position on the map, it is necessary to determine the azimuth of our goal on the map and then follow it in reality. In order not to have to check the compass all the time, especially while crossing major natural obstacles, we recommend you to pick a stable and visible natural feature in the line of wanted direction. On the way to that feature, you will not need to check the compass again, thus gaining on the speed of your movement.

These are some of the basics of natural navigation that might come in handy if you are trying to find your way. Of course, before wandering into the wilderness it is better gain some experience with it on a safe and experienced Outward Bound adventure!

Our team is waiting for you! 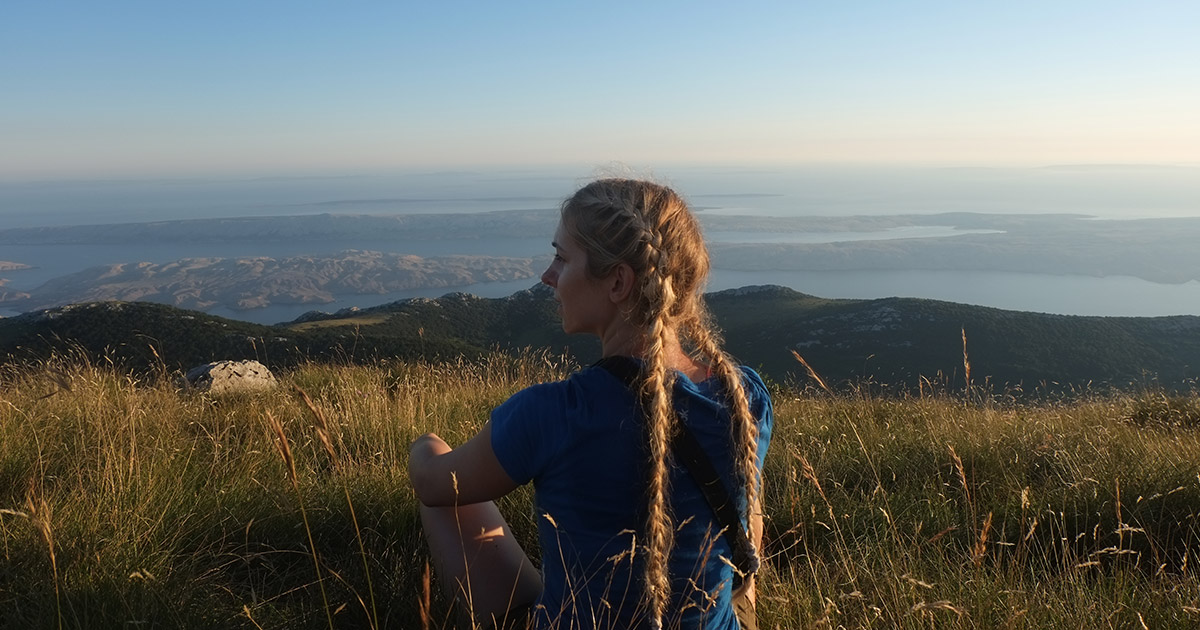 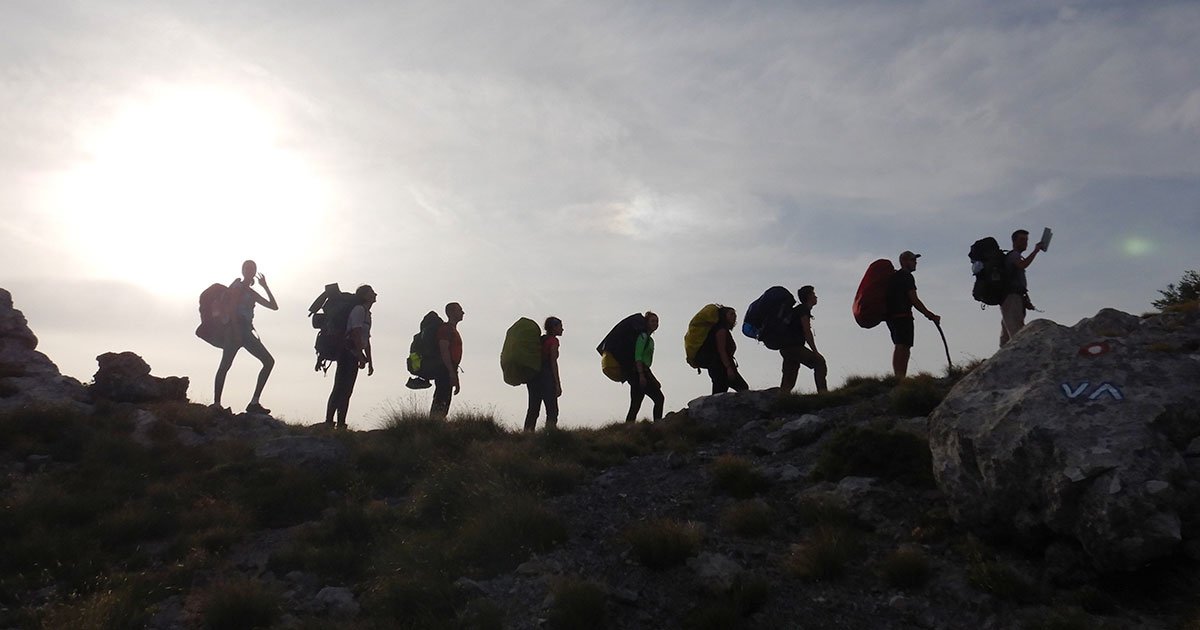 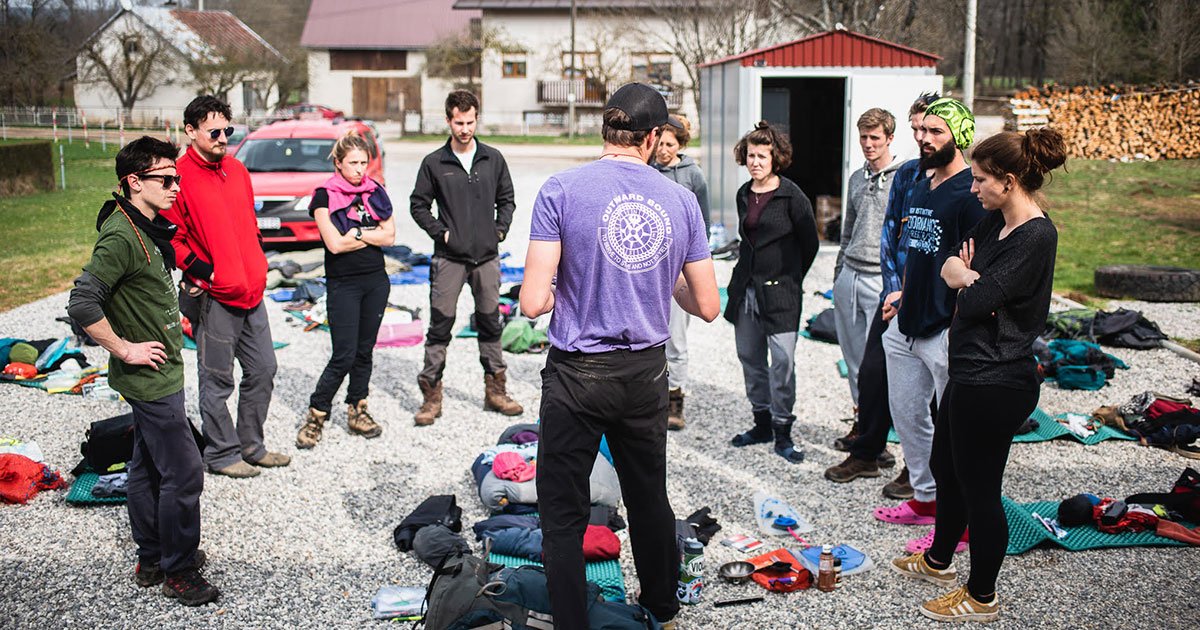 Latest on our Blog

A Typical Day on an Outward Bound Expedition

Communication skills all students should develop before graduating